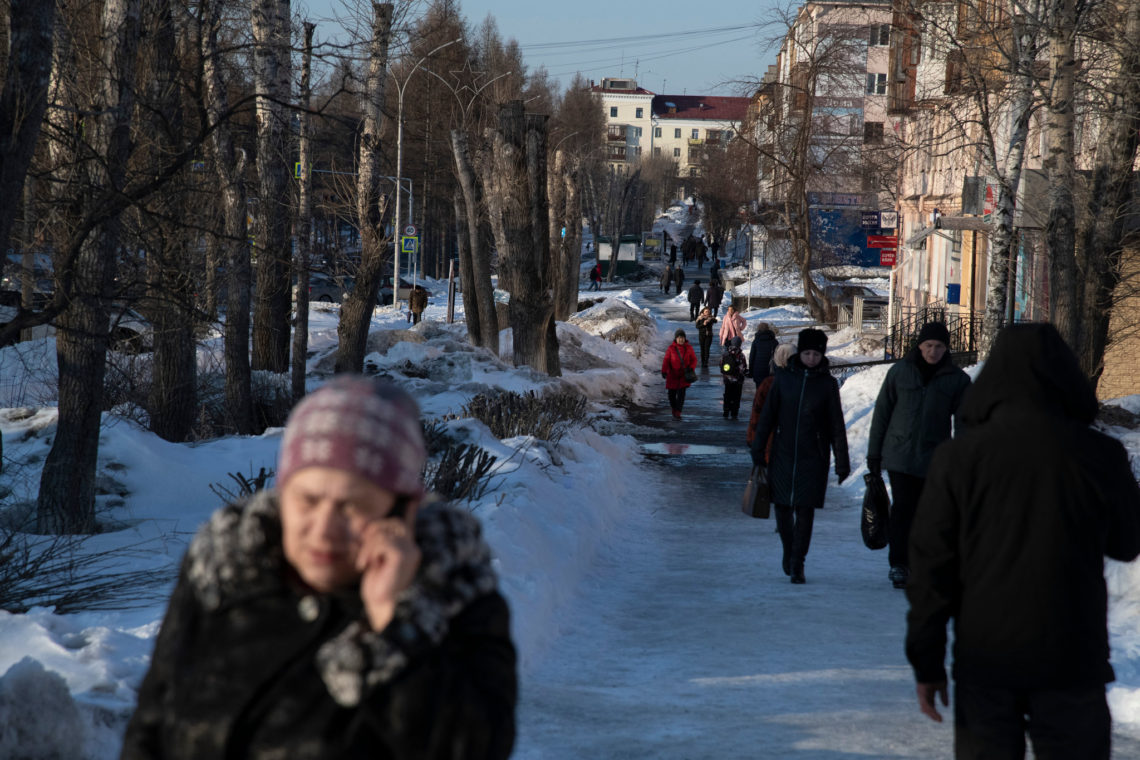 ASBEST, Russia — Sniped at for decades by health advocates, Russia’s doggedly defiant producer of asbestos — a substance banned as a killer by more than 60 countries — thinks it has perhaps finally found the perfect figure for a campaign to rehabilitate the product’s deeply stained image: President Trump.

“Trump is on our side,” said Vladimir V. Kochelayev, chairman of the board of Uralasbest, one of the world’s few remaining producers of asbestos, citing what he said were reports that the Trump administration was easing restrictions on asbestos use.

The United States stopped mining asbestos in 2002, but the material still pours onto the world market from a huge hole in the ground in Russia’s Ural Mountains. The surrounding city, where nearly every family depends in one way or another on a substance that the World Health Organization says is a serial killer, is called simply Asbest, the Russian word for asbestos.

Canada has a town called Asbestos, too, but it stopped producing the stuff years ago and has toyed with changing its name to something less off-putting. Its Russian twin, where locals seldom if ever question the wisdom of mining asbestos with explosive charges that stir up thick clouds of dust saturated with asbestos fibers, sees no reason to do anything like that.

All the same, it has tried hard to shed asbestos’s associations with lung cancer and other diseases by rebranding its product as “chrysotile,” the bland, technical name of the specific type of mineral it mostly mines.

Chrysotile not only sounds less scary, it really is, said Mr. Kochelayev.  He insisted it was much less dangerous than other forms of “asbestos,” the generic commercial name used to describe different fibrous minerals that until the 1970s were used around the world in insulation, roof tiles, fire-resistant clothing and many other products.

“I cannot say it is totally safe,” Mr. Kochelayev said of chrysotile, but “it can be used in controlled situations without danger.”

After years of watching a global campaign against all forms of asbestos gather steam amid mounting health liability issues, Mr. Kochelayev’s company last year reacted with glee to reports that the Environmental Protection Agency under Mr. Trump was relaxing tight restrictions on asbestos use in the United States.

The agency denied doing any such thing, but Uralasbest celebrated nonetheless by posting a picture on its Facebook page showing pallets of its asbestos stamped with a seal that featured President Trump’s face and the words: “Approved by Donald Trump, 45th president of the United States.”

The photo was a public relations stunt, and none of the asbestos sold by Uralasbest was ever stamped with Mr. Trump’s face. But the image generated widespread media attention for a company that had previously made headlines only when it was denounced by anti-asbestos campaigners.  “This was a very successful media operation,” said Pavel Kashpurov, a young Uralasbest public relations expert who dreamed it up.

He came up with the idea after the E.P.A., then under the leadership of Scott Pruitt, a Trump appointee, announced “new use” rules for asbestos that campaigners denounced as opening the way for more use of the material. The agency said its intentions had been misinterpreted.

With Brazil and Canada, which used to supply most of the asbestos used in the United States, now out of the business, Russia sees an opening for its own product — if only it can get Americans to stop worrying about dying and listen to its sale pitch that Russian asbestos, or chrysotile, is really not so bad. After years of declining output, Uralasbest last year increased its asbestos production to 315,000 tons, 80 percent of it sold abroad, from 279,200 tons.  But it sold only 67 tons to the United States, a market that had all but disappeared because of health concerns but is now picking up slightly. The 750 tons of asbestos imported over all last year by the United States was still nowhere near the 803,000 tons consumed in the United States in 1973, before a tidal wave of lawsuits and health warnings made asbestos a byword for death and financial ruin.

Nobody in Asbest, 900 miles east of Moscow, is expecting asbestos to be fully rehabilitated any time soon, with or without a helping hand from Mr. Trump.  But the rebranding of asbestos as chrysotile has helped slow the collapse of the city’s economic backbone and blunted calls for a global ban on all forms of asbestos.  The town’s former mayor, Andrei Kholzakov, who chairs an international association of trade union groups lobbying for asbestos, said that hopes of a turnabout in American policy had been disappointing so far. Still, he said that Mr. Trump, as a businessman familiar with construction, “understands the reality of asbestos better than other people.”

Mr. Trump, before becoming president, did indeed have a long record of defending asbestos as a fire-retardant, tweeting in 2012 that if it had not been replaced with “junk that doesn’t work, the World Trade Center would never have burned down” in the attacks of Sept. 11, 2001. His 1997 book, “The Art of the Comeback,” said that asbestos had “got a bad rap,” claiming that efforts to force its removal from schools and other buildings were “led by the mob,” rather than motivated by health concerns.  Such views mesh neatly with Russia’s own longstanding view that asbestos producers are the victim of an elaborate conspiracy driven by greedy, primarily American, lawyers who make money suing for asbestos-related damages and chemical companies that produce alternative fire retardant materials.

The city of Asbest, after more than 130 years of intensive mining, still has enough chrysotile asbestos buried in the ground to keep Uralasbest in business for at least another century, provided its customers, mostly in Asia and Africa, do not take flight.  It also has seemingly bottomless reserves of enthusiasm among residents for a product that, according to a 2014 report by the World Health Organization, kills more than 107,000 people worldwide each year.

Even local doctors are entirely with the program.  Igor Bragin, the head doctor at Asbest city’s hospital complex, dismissed as “not corresponding to reality” a 2016 scientific study that showed elevated rates of lung cancer there. The study, a comparative review of death rates in Asbest and the surrounding region of Sverdlovsk, found that “mortality rates for cancers of the lung, stomach and colon were statistically significantly higher in Asbest city.” The incidence of mesothelioma, a lung disease widely blamed on asbestos in the West, was not studied because Russia does not register that disease separately.

While there is some scientific basis for claims that chrysotile, also known as “white asbestos,” is less dangerous than “black” and “blue” asbestos, the International Agency for Research on Cancer said “there is sufficient evidence in humans for the carcinogenicity of all forms of asbestos,” including chrysotile.  Uralasbest says that cases of disease among employees have fallen sharply as it has introduced better air filters in its huge processing plant and forced workers there to wear better masks. But, while boasting of its improved conditions, the company declined to grant access to the factory, saying it was in a restricted zone.

The view of many Asbest residents is that there are so many other things to worry about in their heavily industrialized region, including a nuclear power station just a few miles away and an even nearer coal-fired power plant, that asbestos is probably the least of their worries.  “Everything is potentially dangerous,” said Ksyusha Ustinova, a 30-year-old woman who, dressed in a fur-trimmed coat, came with friends last week to peer into the six-mile-long hole on the outskirts of town where asbestos is mined. “Why worry about asbestos so much?”

Viktor Stepanov, an 88-year-old pensioner who spent decades working in the asbestos factory, said his own advanced age and continuing good health were proof that all the “hysteria” about asbestos could not be true. He explained that while working at the asbestos plant, he drank a bottle of milk a day, which the company provided free to help workers fend off disease.

“Everything is dangerous to some degree,” he said. “One-hundred percent guarantees that something is not harmful do not exist.”