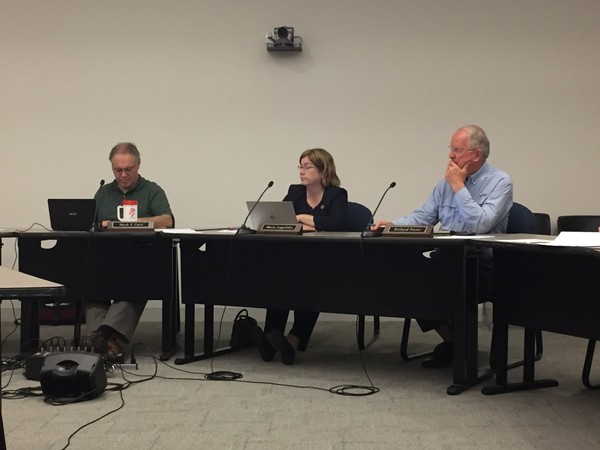 LONGMEADOW — More asbestos has been found at the site of the Department of Public Works building under construction on Dwight Road, likely meaning more expenses and delays.

The town broke ground for the $22 million facility last year, and it was originally projected to open this year. But the project has repeatedly hit setbacks and now likely won’t be finished until 2020.

Officials said the town may ask for additional funding from taxpayers this fall to cover asbestos abatement.

Select Board Chair Marie Angelides asked building committee chair Marybeth Bergeron at a meeting Tuesday if she expects this most recent discovery to be the last time new asbestos is uncovered at the site. Bergeron said she couldn’t answer that question.

“I will say there have been a number of times in the process over the last 12 months that we thought this would be the last of it,” Bergeron said. “Do I believe this will be the last of it, yes, I do, but I thought that before, and they keep uncovering additional asbestos material.”

The Select Board approved a $45,750 change order for asbestos abatement.

The asbestos material was found at the southwestern embankment when contractors began digging in order to construct a retaining wall. The state Department of Environmental Protection is requesting it “be resolved,” Bergeron said.

“The contractor came up with the best way to deal with that, which is to bury it on site,” Bergeron said. “A hole will be dug, and the material will be buried and covered with orange material so if anyone digs, they’ll be alerted to asbestos material. … It’s the least expensive way to address the issue.”

The committee also considered paving over the material, which Bergeron said would cost about $56,000. But the DPW thinks it could be paved at a later time instead, and probably for less than the contractor’s quote, according to Bergeron.

Interim Town Manager James Moynihan said in an interview this week that a specific dollar amount needed to finish the project has not been determined. He also declined to provide a ballpark figure.

“I would anticipate when the board considers articles for the November special Town Meeting that they will consider the question of putting an article on relative to increasing the cost for the appropriation for that site,” Moynihan said. “What prompts them to do it is the fact that asbestos was found on site, and there are costs inherent there that the town has had to incur relative to addressing that matter.”

Resident Tom Shea says given the large unforeseen expenditures, he and others want more communication and updates on the project from town officials.

“I think transparency with taxpayers has been woefully inadequate in terms of disclosure and just basic telling people what’s going on,” Shea said during public comment at the Select Board’s Tuesday meeting.

In an interview, Moynihan said, “The board has open meetings and has acted publicly with regard to any change orders there,” adding that the board has acted “probably in a manner they believe prudent relative to ensuring the project’s completion and making sure that the matter of the asbestos has been responsibly addressed.”

The Select Board will hold a public forum Sept. 25 to discuss the DPW building project and other fall Town Meeting warrant items, including to answer residents’ questions, Angelides said.

The DPW building is being built at the site of the former Grande Meadows Tennis Club. In July 2018, shortly after the groundbreaking, contractors discovered coating on the rubberized tennis courts that contained asbestos.

That same material has been found throughout the property, including under the former blacktop parking area. Select Board member Mark Gold last year said the town didn’t know about the asbestos until after it purchased the property.

The DPW project and its setbacks have been discussed by the Select Board numerous times over the past year.

Last August, the board approved a $290,000 change order to clean up and dispose of the first discovery of asbestos-containing material. The board said the money would come out of the project’s contingency fund, adding they would explore options and costs for disposal.

Town officials worked with MassDEP to bring the contaminated soil to the municipal landfill at Birnie Road and Tina Lane, saving $2 million over trucking the soil out of state, Crane said previously.

In May, Town Meeting voters approved an $800,000 article to cap that landfill, which the town had already been planning on doing for years, before the construction and discovery addition of asbestos materials, Crane said.

According to the board’s May 20 meeting minutes, Crane said construction had been “hampered by unfortunate circumstances resulting in significant delays and cost escalations.”

In addition to discovering the asbestos last summer, near-historic rainfall this spring led to high groundwater levels that made installing underground infrastructure challenging and destabilized an embankment at the north end of the site, according to the minutes.

“The project is nine months behind schedule and the town, along with the Building Committee, design team, and (owner’s project manager), are evaluating the impacts to the project’s costs and remaining funds,” Crane said.

At the Select Board meeting this week, Bergeron said cleaning up trees that fell into the embankment this spring cost about $50,000 and was done on an emergency basis because the trees were diverting water runoff and causing erosion.

Gold said maybe funding for that tree cleanup should have come from another source, like the town’s stormwater utility program.

Bergeron said the “argument could have been made,” but the work needed to be done before heavy machinery and more construction could proceed in that area. Some expenditures can be approved directly by the building committee without needing approval from the Select Board or Town Meeting, Bergeron said.

On July 10, the Select Board approved another change order for $94,500 to extend the contract with the owners project manager, Colliers. The original contract expired due to the delays, according to meeting minutes.

In that same meeting, Bergeron told the board they’d needed to purchase a new water line, since “the town needs to tap into the Springfield Water and Sewer Commission’s line for water and the line wasn’t where it was supposed to be,” Bergeron said. The new water line cost nearly $37,000, according to the building committee’s July 9 minutes.

When Gold asked where the funds would come from, town Chief Financial Officer Paul Pasterczyk said there was still $1.3 million from the bond. The original authorization was for $19.7 million.

Crane said there had been a disagreement over the amount of the claim related to project delays.

“We need to build the building to know what the additional costs will be,” he said.